In the European Food Risk Assessment fellowship launched by the European Food Safety Authority (EFSA) programme, young and mid-carrier scientists get the chance to widen their knowledge and hands-on experience in food safety risk assessment.

The Norwegian Scientific Committee for Food and Environment (VKM) initiated the project “Faster, better and stronger exposure assessment” as part of the 2018/2019 cycle of the European Food Risk Assessment fellowship. Through application procedures, EFSA selected VKM as a hosting site and Carolin Fechner from the German Federal Institute for Risk Assessment as fellow.

For the one-year project, fish was chosen as the targeted food group for the planned study. Norwegian and German data were used in comparison. In cooperation with Norwegian and German scientific institutes, the aim was to refine approaches for dietary exposure assessment using data on fish consumption and fish contamination. Especially the influence of fish origin and catching area was integrated to develop refined approaches.

Results on dioxins and dioxin-like polychlorinated biphenyls (DL-PCBs) as contaminants in Atlantic herring (Clupea harengus) will be published in a technical report in the EFSA Journal and in a research article. The findings include that consumption of herring was different in Norway and Germany, that German consumers of herring ate higher amounts, and that herring from the Baltic Sea had higher concentrations of dioxins and DL-PCBs than herring form the Norwegian Sea. We conclude that country-specific information on food consumption and contaminant concentration can influence the dietary exposure assessment and give different results from assessments using pooled European concentration data.

The project was presented on posters this year at the EFSA/BfR International Conference on Uncertainty in Risk Analysis (20-22 February in Berlin), and at the Food Safety Authority of Ireland Conference (21-22 August in Dublin).

Interested in the EU-FORA Fellowship programme? Calls for applications from potential fellows and hosting sites for the 2020/2021 cycle are planned to be launched in November 2019. Read more here 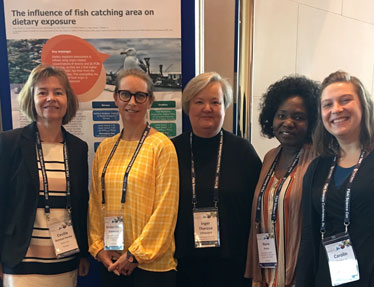